When you research the heart of Raleigh, you’ll find six destination districts: Capital District, Fayetteville Street, Glenwood South, Moore Square, Warehouse District, and Seaboard + Person Street. But, when you start looking for your home, that’s when you realize there are a lot more neighborhoods than just those six districts that weave in and out of downtown and beyond. That’s where an experienced broker like us comes in. We know every neighborhood in and around downtown better than any other agency in the Triangle. And not just because we’re brokers—it’s because we live there ourselves. When you work with us, we’ll help you find your perfect neighborhood. But we know that it helps to have a starter guide.

rEADY TO GET STARTED? REACH OUT TO OUR TEAM.

Contact us below to begin a conversation, ask questions, or let us share with you some of our successful development projects.

TALK TO OUR TEAM

But we know that it helps to have a starter guide.

Fayetteville Street is the one of the oldest streets in the City of Raleigh. At the north end, it begins at the majestic State Capitol building, and at the south end it emerges as the central hub for the arts with the Duke Energy Center for the Performing Arts—home to the NC Symphony, the Carolina Ballet, and traveling Broadway musicals through NC Theatre.

In this downtown district, you’ll walk to see mixed-use high rises, office skyscrapers, and over 50 restaurants and bars—including many of the restaurants from James Beard winner Ashley Christensen.

Living here offers you walkability to the majority of Raleigh’s most acclaimed restaurants, multiple options for live music, and easy access to the best community festivals held in the Downtown—from the local arts festival SparkCON to the International Bluegrass Festival.

Where:
North Downtown, begins at the Capitol Building

Adjacent to the Fayetteville corridor and an 8-min walk southeast of the Capitol Building, the Moore Square district is marked by the two recently-renovated anchors: the beautiful Moore Square Park and the GoRaleigh Transit Center.

Moore Square is one of the most dynamic parts of downtown Raleigh, home to both corporate headquarters, high-rise residential buildings, nationally-acclaimed restaurants, and even a museum for kids. It’s also becoming the most densely populated with recent developments such as SkyHouse, The Lincoln, and The Edison Lofts.

Moore Square offers the most artistic side of downtown living—from multiple music venues to galleries with artists-in-residence.

Where:
East Downtown, 8-min walk from the Capitol Building

You know you’re in the Warehouse District when you spot the historic red bricks and feel the artistic revitalization. In the last ten years, Raleigh’s downtown Warehouse District has evolved into a vibrant mix of art museums, restaurants, destination retail, and technology firms. It offers convenient access to expanding transit travel with Raleigh Union Station and both for-sale living options like the condos at The Fairweather (see those listings here) and for-rent choices, like the apartments at The Dillon.

Featuring nationally-recognized architecture, the Historic Warehouse District is one of the most dynamic parts of downtown. Living here gives you easy access to downtown’s first grocer, an expanding restaurant scene, and multiple options for coffee and drinks.

Where:
Southwest Downtown, 10-min walk from the Capitol Building

As you walk north along Fayetteville Street, you arrive at Raleigh’s oldest district: the Capital District— home to both the North Carolina’s State Capitol Building and the Governor’s Mansion. Built in 1840 with the Greek Revival style, the State Capitol Building presides on a park square dating back to a city plan designed in 1792. Many of the government buildings reflect the popular Classical Revival style of the late 19th century, but a few buildings from the late 18th century still stand, including Haywood Hall and the White-Holman House.

Although state government buildings and facilities define this district, it’s also home to the NC History Museum and the NC Museum of Natural Sciences. Combined, these two museums attract over 1.5 million visitors annually—more than any other attraction in the state of North Carolina. As the center of downtown, the Capital District is a short walk away from the hundreds of businesses, bars, and restaurants that fill the nearby downtown districts.

Peace University anchors the quietly hopping commercial centers of Seaboard Station and Person Street Plaza on this northern end of downtown Raleigh. This neighborhood offers some of Raleigh’s most beloved local businesses—from bakeries and restaurants to cycling and boutiques, and as more residents move in, more businesses will continue to set up shop.

In addition to the new residential developments, a mixed-use redevelopment of Seaboard Station will bring new life to the area with a boutique hotel, 650 apartments, and 90,000 square feet of restaurant and retail space.

Where:
North Downtown, 10-min walk north of the Capitol Building

Sitting just northwest of the Capitol building, Glenwood South describes both a street name and a vibe; it has an identity all of its own within Downtown Raleigh—and maybe even two identities. While in the daylight, Glenwood South draws people to business lunch spots, art galleries, and boutique stores, at night, it’s lit—literally. Neon signs invite social club goers, and live music escapes into the streets. As the weekends turn late-night, sidewalks fill up with dancers queueing behind velvet ropes.

This neighborhood has long been considered an entertainment district, but in the last decade, it’s shifted toward supporting more residential units. Residents of this district can enjoy the cooperation of the Glenwood South Neighborhood Collaborative (GSNC), which provides residents and businesses a platform to communicate and work together to shape the future of the neighborhood. This collaborative will continue to expand; over 1,300 new units have recently been delivered or are under construction.

Where:
Northwest Downtown, 15-min walk west of the Capitol Building

OLDE EAST IS A Short Walk from Downtown Raleigh

The historic Olde-East Raleigh-South Park is just a short walk from the Fayetteville St. corridor, and the oldest sections defined the edge of Raleigh’s original city limits. Development began in 1865 and continued to 1940 (although the oldest houses here date back to 1850).

This emerging neighborhood is anchored by the HBCU Shaw University and is marked by architectural styles that range from Neoclassical to Craftsman to Colonial Revival, and these houses are marked by quaint plots, gables, and well-kept gardens. More recently, at the junction of South Park and East Raleigh neighborhood, Monarch Property Co. bought and redeveloped the historic Carolina Coach Garage to open Transfer Co. in 2019 bringing a local food hall, market, and community event space. 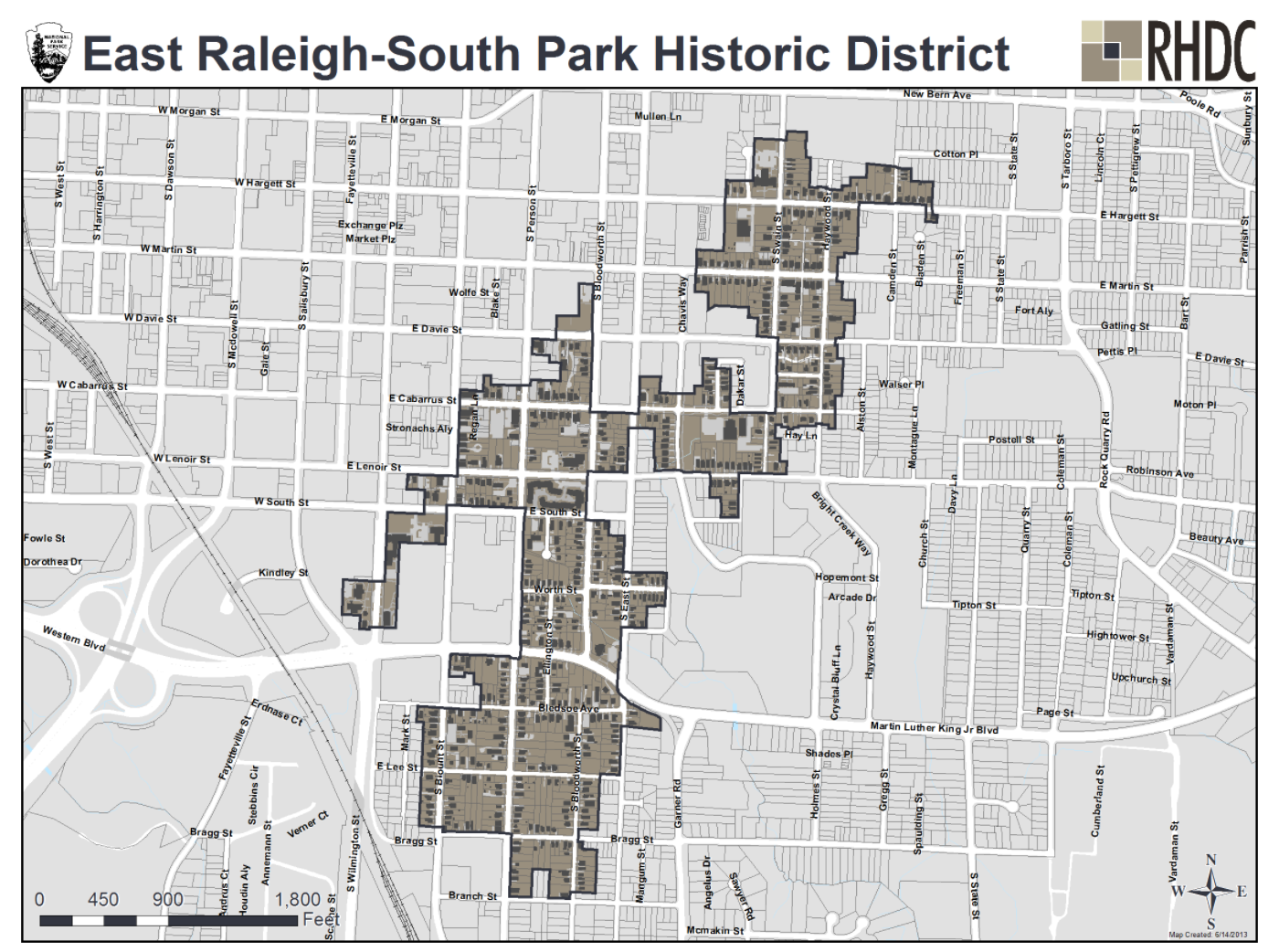 Historic Oakwood is one of the most architecturally-rich and well-preserved neighborhoods in Raleigh, and it was Raleigh’s first local Historic District.

One of the most beautiful features of this neighborhood is its setting on the eastern side of the iconic and idyllic Historic Oakwood Cemetery, one of Raleigh’s most treasured sites. This historic neighborhood also sits adjacent to Oakwood Dog Park and is only a short walk to Moore Square and downtown destinations like Artspace. 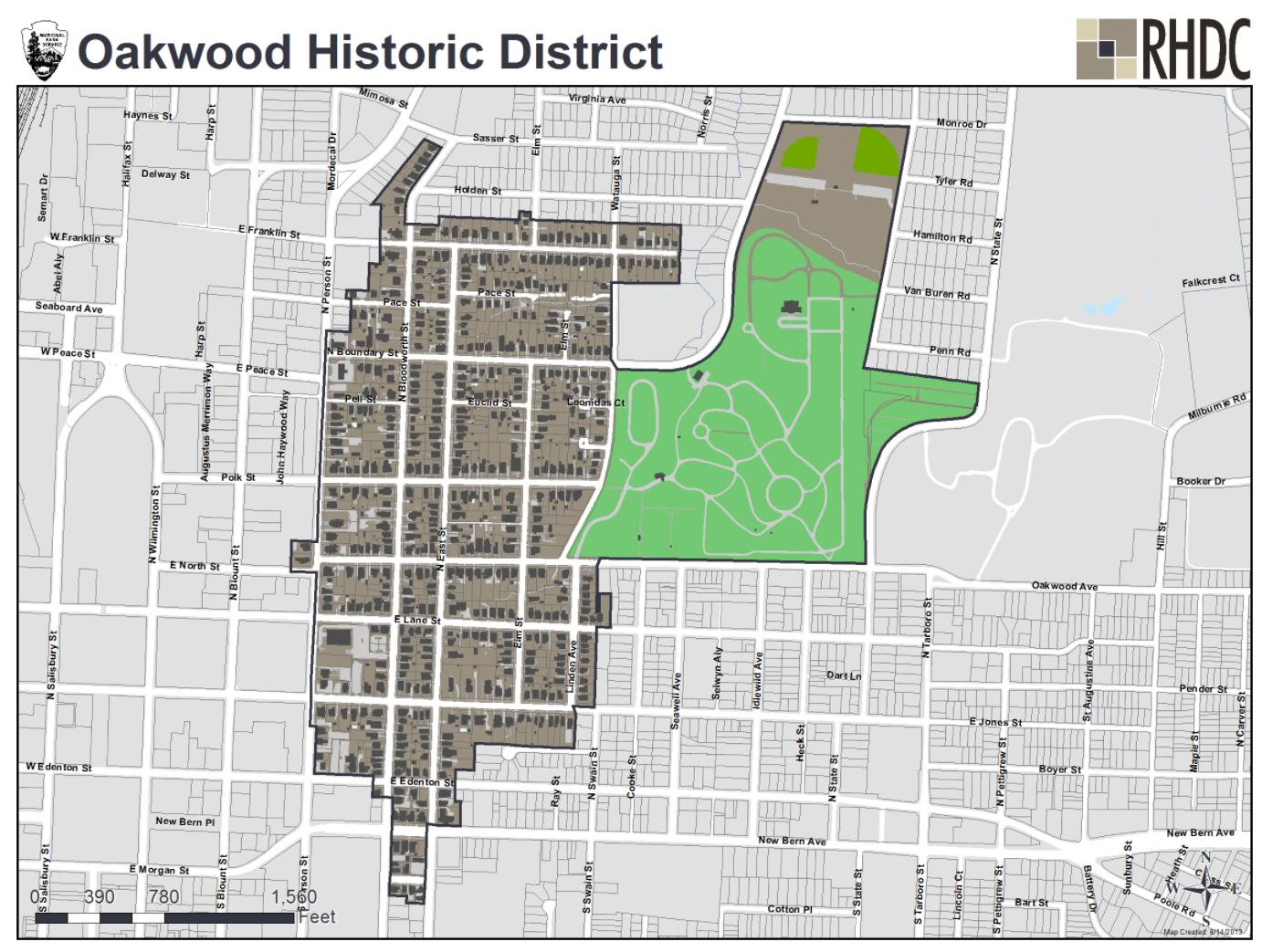 Cameron Park saw most of its development from the 1910s to the 1930s. Like other developments of its time, architectural styles varied from Colonial Revival to Tudor Revival.

The neighborhood is centered around Forest Park and Edna Metz Wells Park which provide wooded pathways through the neighborhood toward Cameron Village. Most houses are all within a block or two of public greenspace and feature quaint, narrow alleyways running alongside their backyard garages. Cameron Park offers easy walkability to both the shops and eateries at Cameron Village and the classic haunts of Hillsborough St. 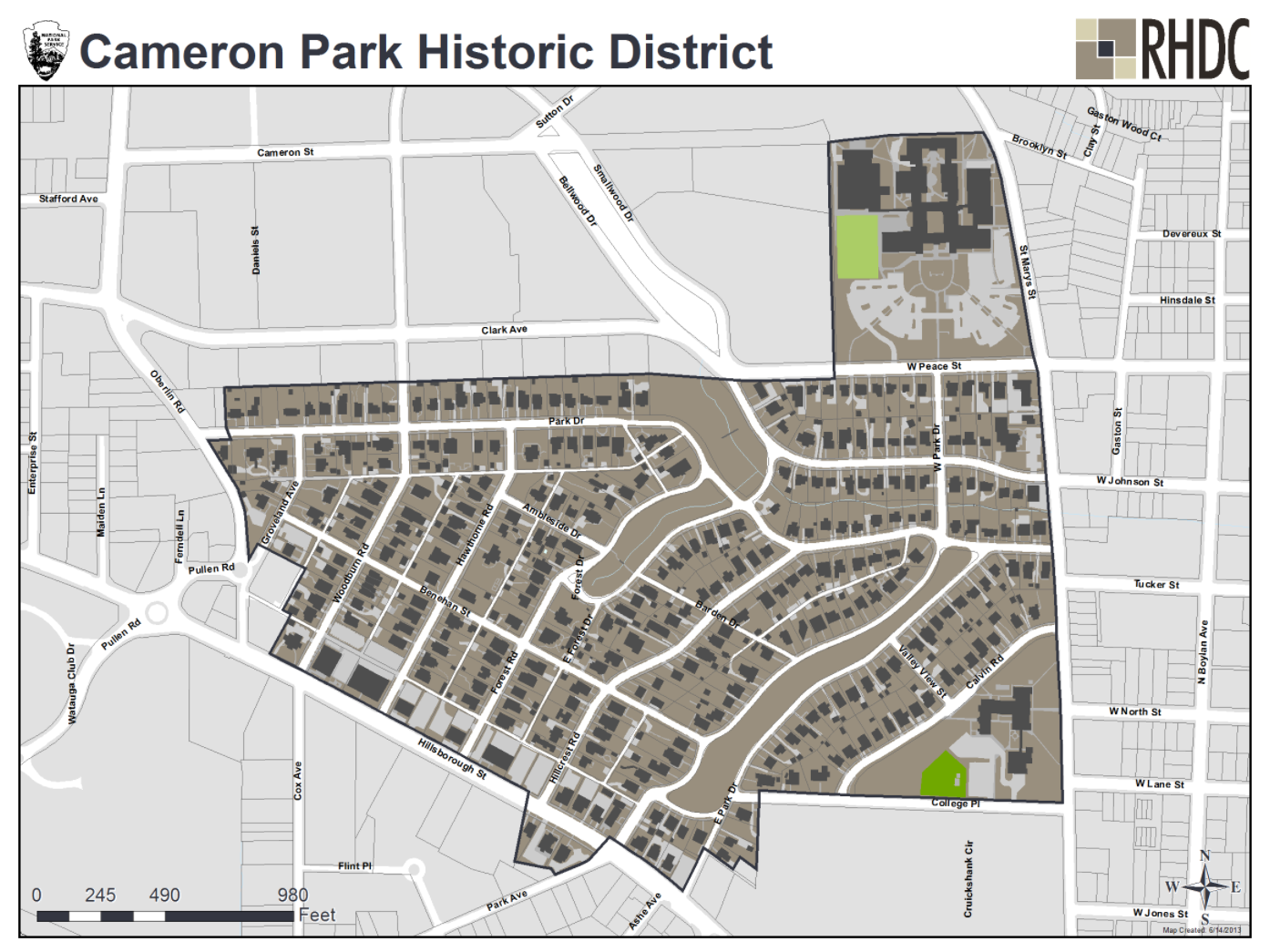 As one of Raleigh’s earliest planned neighborhoods, this Historic downtown neighborhood is beloved for its collection of craftsman bungalows and quiet tree-lined sidewalks. This neighborhood sits on the lower end of Downtown Raleigh, just west of the Warehouse District.

Recent developments on the northern end of Boylan Heights include the spacious light-filled condos of The Fairweather bridging Boylan to the emerging energy of the Warehouse District. 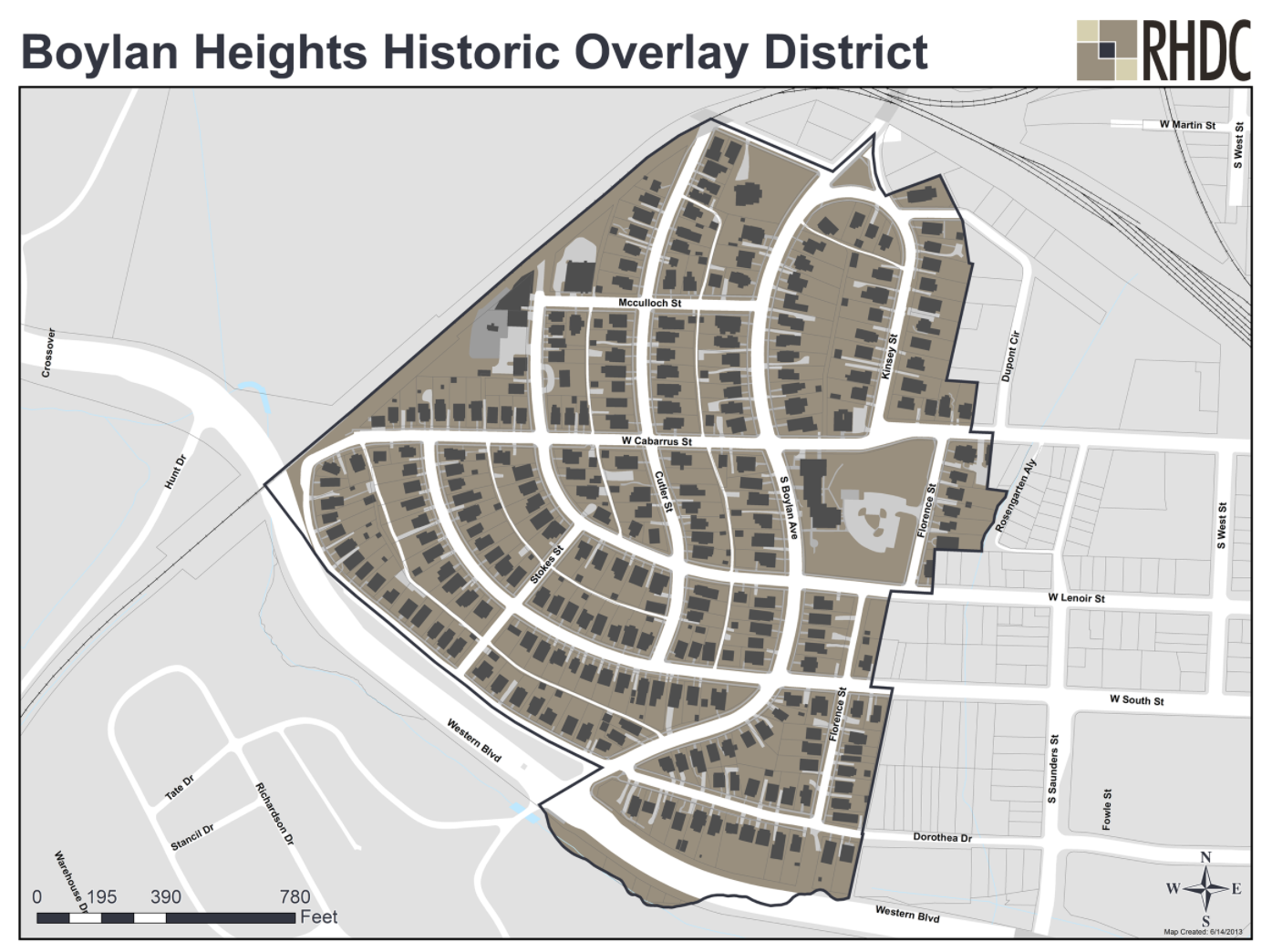 Mordecai Place dates back to the 1700s, and its Mordecai Historic Park features the actual house where U.S. President Andrew Johnson was born.

Several other historic houses still stand, but most livable homes today date back to the 1920s and feature a wide variety of architectural styles including Colonial Revival, Craftsman, Tudor Revival, and Spanish Mission Revival, to name a few.

Today, life in Mordecai offers both the beauty of historic Raleigh and downtown walkability, with new local businesses contributing to the revival where this peaceful neighborhood blends into downtown. 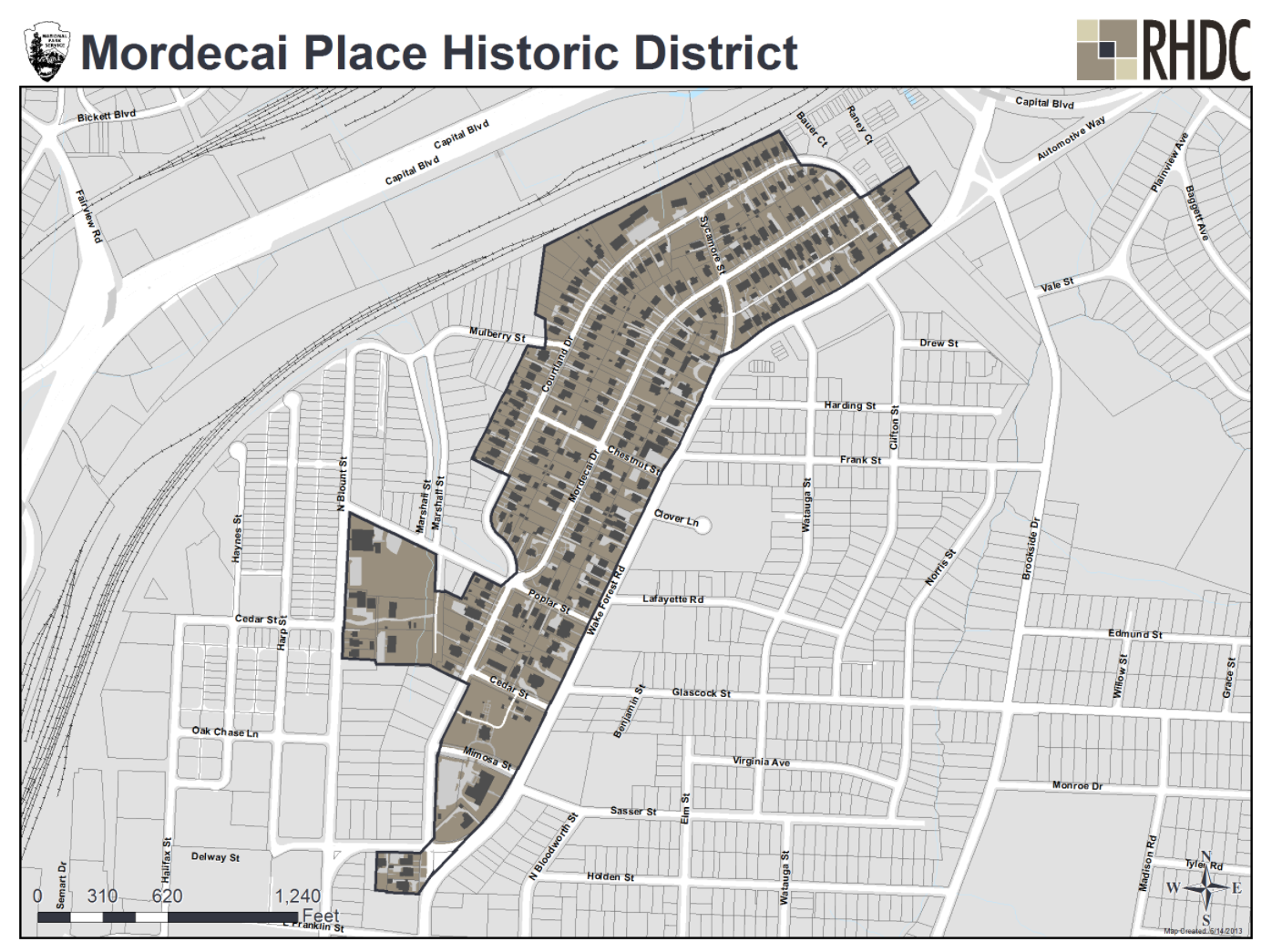 Today, Hayes Barton is part of the neighborhoods collectively known as Five Points, and residents enjoy walking to long-standing neighborhood establishments, as well as between each of the beautiful historic neighborhoods. 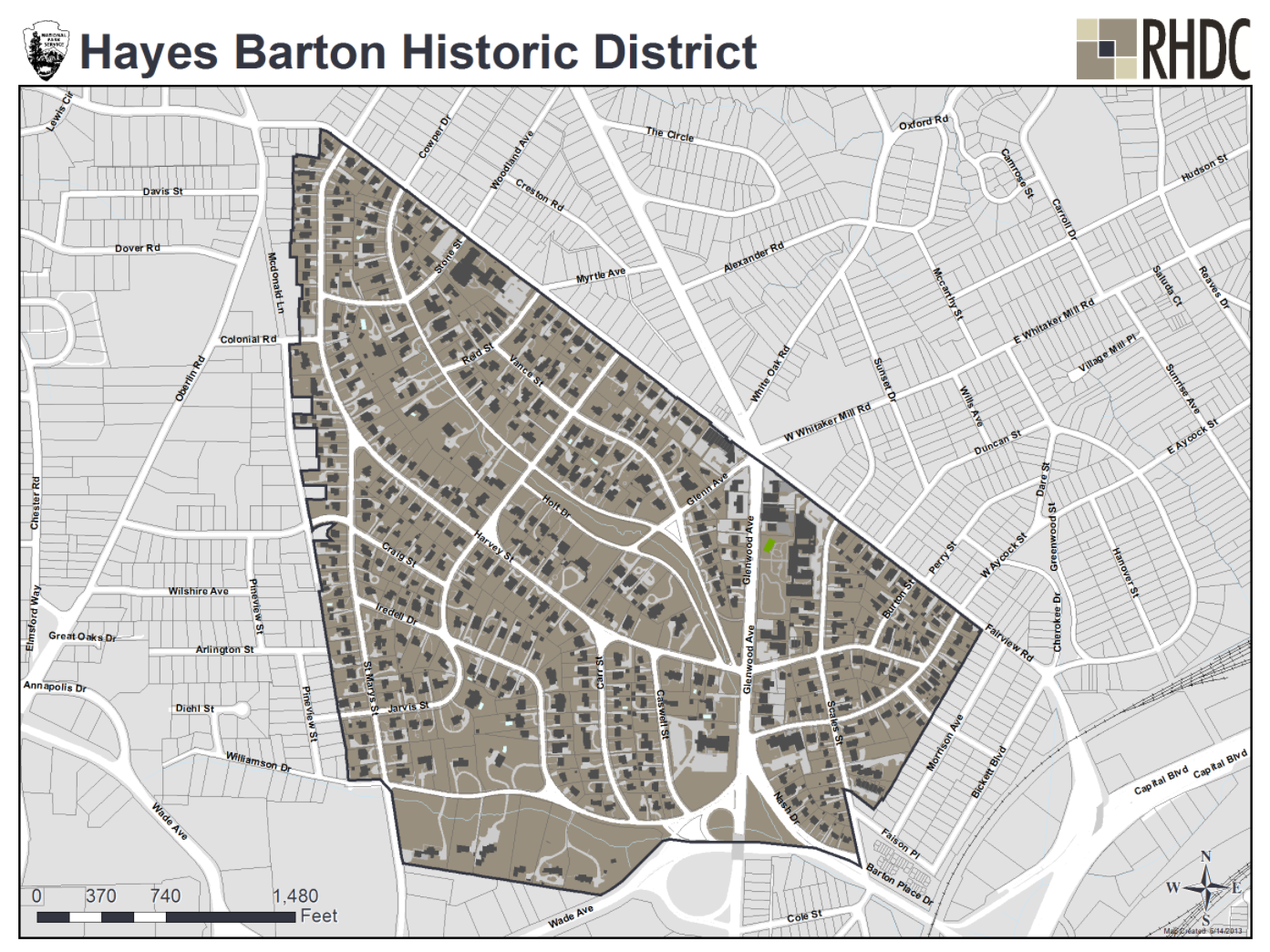 Largely characterized by the Queen Anne architectural style, the Glenwood-Brooklyn neighborhood was developed in the early 20th century along the streetcar-lined Glenwood Avenue.

Other prominent architectural styles include Colonial Revival and Craftsman. What was once considered a suburb of Raleigh during the time of its development, the Glenwood-Brooklyn district is now a historic neighborhood adjacent to many of downtown’s growing attractions and amenities. 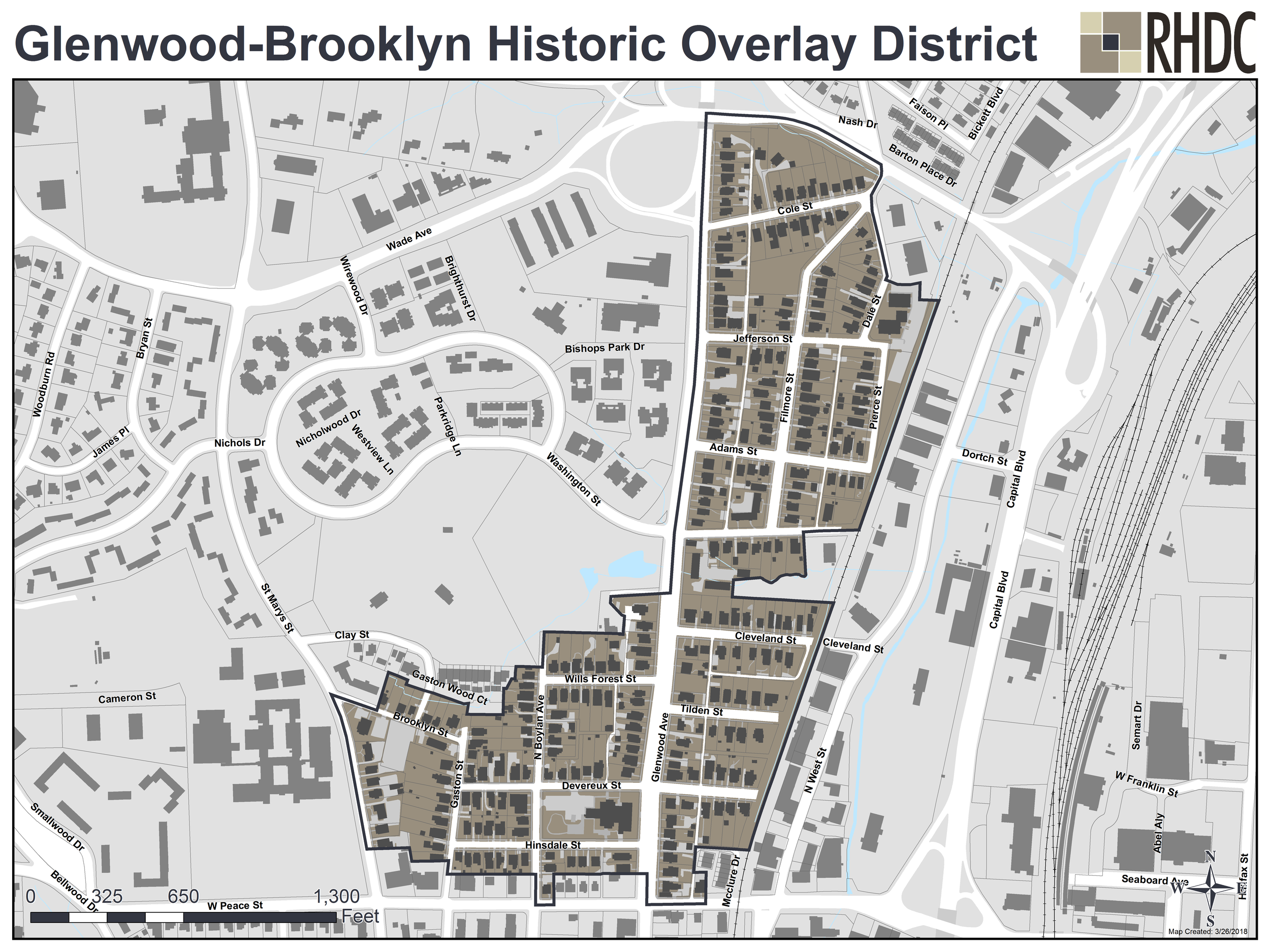 Comprising a handful of historic suburbs, up-and-coming Five Points radiates out from the intersection of Glenwood Avenue with Whitaker Mill and Fairview roads. The affluent Five Points area has elegant, bungalow-style 1920s housing from Raleigh’s second wave of suburban development.

A variety of laid-back restaurants serving tacos, burgers and organic pizza dot the district, along with craft breweries. The Rialto Theatre is also a highlight. It dates back to the 1940’s and shows classic movies in addition to new releases. 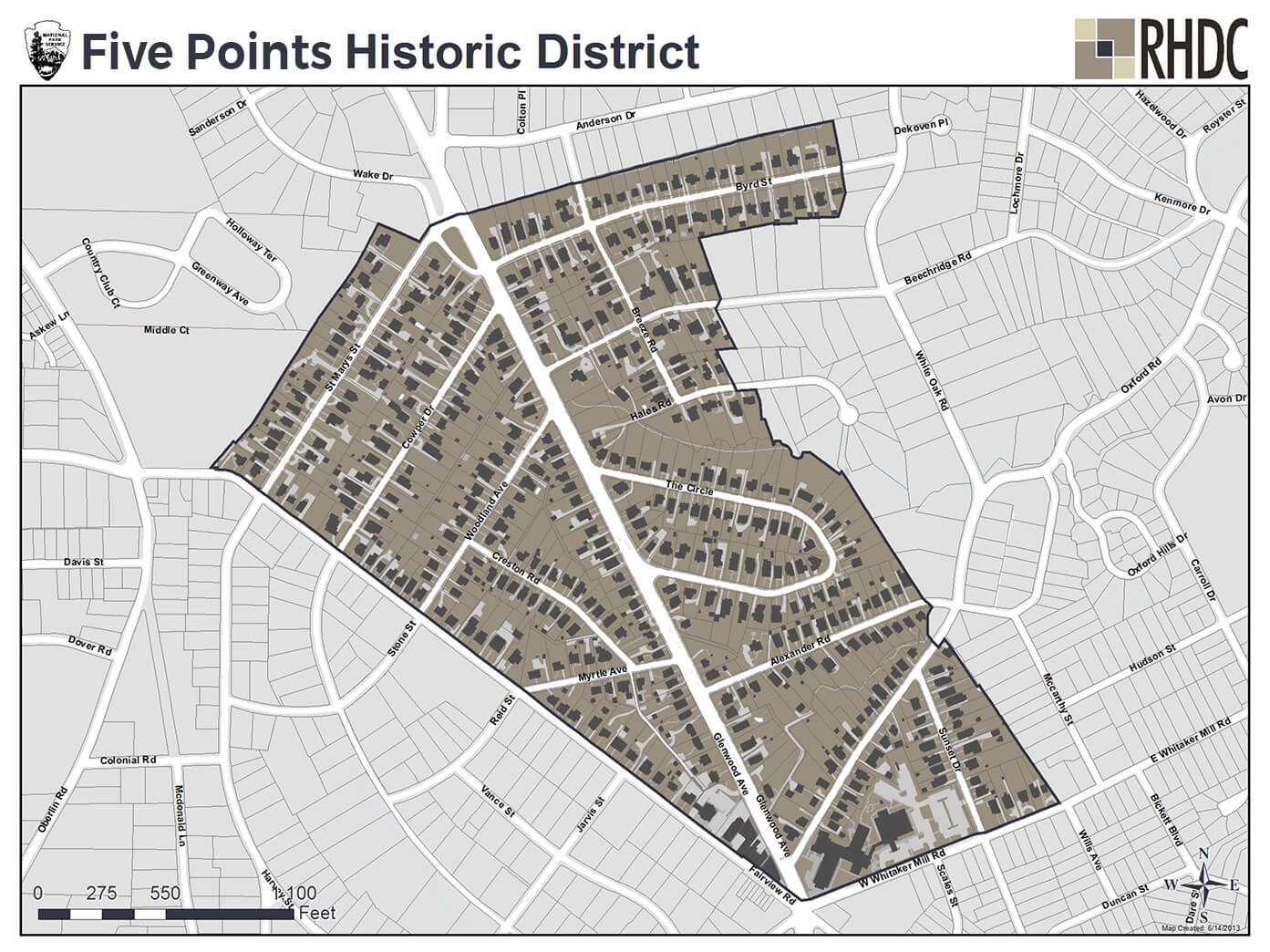